I know nothing about being a hero. Really. Until I became one unintentionally. I would confess here that I’m not a cape-wearing superhero… but sometimes I actually do wear a cape. Or I did last weekend anyway (three if you count my socks). Seriously. 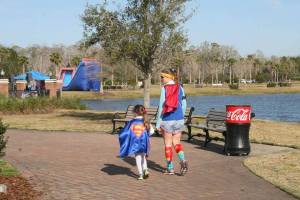 My family participated in the second annual Superhero 5K in support of the little one’s previous school (VPK) and her teacher from last year. She got to see old friends, and give Mrs. Natalie some big hugs, and run her own kids’ race. My husband announced the 5k runners as they crossed the finish, including me.

I used to run quite a bit, but life happened and I have had a really hard time getting myself committed to it again, so I declared a little over a month before the race that I would do it because I knew I needed a reason to run. I still had a hard time making time to train, so more than two miles was a challenge. My goal going into the race was just to finish. I felt that might be attainable.

I felt good at the start of the race, and I began thinking about the little girl waiting for me at the end and how she seemed more excited that I was running the race than I was to be running the race. Then I started thinking, “Wouldn’t it be awesome if I actually placed in my age group and she could see me get a medal?” But 3.1 miles began to kick my butt,  and my next goal became not to throw up.  As I crossed the finish, I felt I had not only let myself down, but let down my little girl. I was fourth in my age group, just out of medal ranking.

Here’s one of the greatest things about our girl: she is an encourager. She didn’t care if I won a medal. She told me I won my race because I finished. In fact, she spent the rest of the weekend telling people, “My mommy ran a 5k, and I ran the Super Loop. We both won.”

We teach her not to give up,  the importance of committing to something, and knowing it may take hard work to get there. Character is a strong value in our home, and I am so proud of our girl’s. We both ran with our capes on last weekend because she is a young superhero in training, and she thinks I am one already.

I very often just feel like a regular woman who constantly makes mistakes and struggles to get it right, but a little girl who CHOSE to call me her mommy, even though she understands she didn’t get her actual life through me, said to me after the race last weekend, “Mommy, I want to be you when I grow up.” I told her she can be better, but what a compliment.

Our girl makes me always want to be better and inspires me daily. Running is just a part of it, a sort of symbol of the race we call life.  But I plan to run more and win medals, both literally and figuratively, because someone important is watching, and she wants to be me because she thinks I’m a hero.

Posted in Inspirational, Reflection, Uncategorized and tagged being a mommy, running, superheroes. Bookmark the permalink.

Summer is finally here, and many people have been asking me, “What do you plan to do with your summer break?  Don’t you get bored?”  As if I’m instantly pining away for the new school year to start. Here’s the truth on that matter:  Teachers aren’t sad during the summer.  We do not curl up in the fetal position and rock back and forth, begging for papers to grade as if experiencing school withdrawals.  It just doesn’t happen. NO!  We only have two months of the entire year to truly LIVE. Give us some credit.

What are my plans?  I plan on relaxing as much as possible (for ten months of the year I’m wound up so tightly, I make skinny jeans look comfortable)- blogging, reading books, writing and editing a book, sleeping in the hammock, spending quality time with my husband, running and working out, playing with my dogs, going to the beach, working on the house, cooking yummy food, chilling with friends, relearning Spanish, etc.

And when I’m not relaxing, I’m going to work on saving the world.  Yep- I’m going to make as much of an impact as I can on my mission trip to Costa Rica in July.  My secret wish is to be a superhero and end human trafficking.  I get to learn a bit about that this summer with the Rahab Foundation.  I feel my future holds my husband as my human trafficking fighting partner, and dogs as our sidekicks.  More on that later.

So, my question to you is, what are you going to do with your summer?