RSS Feed
← One Car Faith
Go Ye into All the World →

Making an Example of My Marriage

My marriage is far from perfect, so why would God use it as an encouraging example to others?  Maybe exactly for that reason.  I am certain He is the only reason we managed to remain together, for there were a few times I think one or both of us could have walked away from the whole thing and decided it wasn’t worth the trouble, the hurt, the commitment to another person with his or her own ideas and agendas. But in that dark time when Robert was unemployed and most couples would have allowed that stress to come between them, we recognized it as a time we most needed God in our lives, and we had faced some financial issues not long before that time that nearly ended our marriage and literally left me with my head between my knees just trying to breathe, so it was scary, but not entirely new.

Instead of fretting, we took that time to spend together and learn to put God in the center of our marriage.  We even took the time together to learn each others’ “love languages.”  In each of our top three lies quality time, so we learned that spending time together strengthened our love.  That seems like a “duh” revelation, I know, but people often miss these obvious points.  Just the other day I was organizing part of our office and Robert was working on the computer.  We weren’t really spending time “together” but we were together, and we found ways to involve each other or have snippets of conversation in the middle of our tasks at hand.  The simplicity of it was beautiful and encouraging.  Our time together doesn’t always have to be exciting; it just has to be together and involve one another.  Sometimes it’s the reassurance that we’re there for each other. 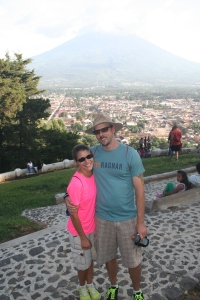 After a hike up a mountain (volcano), we had a lovely view of Antigua.

My mission team has been back from Guatemala for just about six weeks now and when we met on Sunday for a reunion fiesta, much of what I forgot I wanted to share, or I had just needed time to sort out in my brain, resurfaced.  One such topic is my marriage.  It’s strange that a mission trip would bring enlightenment of that area of  my life, but I guess God reveals what He wants us to know in His way, and we had to go all the way to Guatemala for me to see what a blessing my marriage is to others.  I already knew I was happy to be married to Robert, but I had no idea what an example we are to others.

On the trip, Robert and I were actually broken apart from one another for most of the first two work days, and we were fine with that.  We are both able to function without each other quite well.  The hard part was when we remained so busy during the evening that we had no time to reflect together on our days.  By the third day I think we learned to make the time.  We both recognized the importance of time shared with the group, but also being able to share with each other, especially since we both had so much on our minds during this trip.

A huge leaf, shaped like a heart? Couldn’t resist.

Our interactions must have become evident to the rest of the group because we received compliments from various members on our marriage. We were given a homework assignment to write a little encouraging message to each member of the team, letting them know some positive way they touched the team or the individual.  One such message came from a young lady who lives with her amazing mother but comes from a broken home: “I also am deeply thankful for the example  you and Robert set as a healthy couple who has God present in their relationship.”  I’ve kept this card as a bookmark for my daily reading because it reminds me of how we can be encouraging examples without even realizing it and how important it is to always let God shine through us.

Broken homes are universal.  Where we were able to be an encouragement to this girl from the U.S., we were also able to do the same for the children in Guatemala.  Apparently there is a real need for responsible men to step up in families in the area where we worked.  The burden weighs almost entirely on the women, so our loving interactions together became examples to the local children as well.  I remember that on our last day we went to an orphanage for mostly young ladies who primarily came from abusive homes.  One little girl attached herself to Robert and then later was coloring and playing with stickers with me.  I told her Robert was mi esposo, and she thought that was great  When we were saying goodbye to the kids, the three of us had a group hug.  I’m sure this encounter left her with at least some sense of hope.

Author of MEMOIRS OF AN ORDINARY GIRL series http://bit.ly/tlklaes
View all posts by caverns of my mind »
← One Car Faith
Go Ye into All the World →