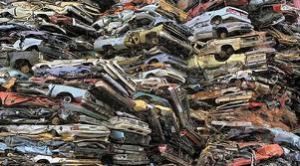 Recap.  I left the world of teaching with nothing officially lined up for after.  No big deal since everyone knows teachers don’t get paid much anyway, right?  Except my husband and I were making an equal income, so this cut our money in half.  Yikes!  Now it sounds insane, and it is.

We lived off not much more than that before when Robert went through some time of being unemployed, but we did get to collect unemployment.  Since I happily vacated my job, no unemployment can be acquired.  When we decided I would take this huge step into the void during a time of high unemployment rates, we did it with the faith that somehow it would all work out because we felt this was a needed step.  If I could find part-time work, we’d be fine.

Then we came to a wall, or a decision that needed to be made.  I was taking off the two months I would have had off as a teacher and was going to job search when school started back up because the lump of checks at the end of the year covered the summer anyway.  During this time Robert’s free car that had miraculously run for three years stopped running.  It was probably just the battery, so we could pay to replace that, and other than the gauges on the dash that rarely worked, the lack of A/C in a black car in Florida, and a number of other oddities plaguing the vehicle, we could have had it running.  However, time was coming to renew the car registration and it was another car we had to pay insurance on.  Since the school year had ended we had really only driven my car.  We began to contemplate life with only one car.  The problem at this point was the uncertainty of what I would do for income.  Having only one car might not work if I found a job with hours that conflicted with Robert’s schedule. 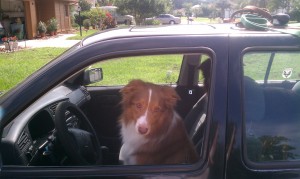 Maybe we should never have let the dog drive.

We could save quite a bit of money if we just let the car go.  But what if we needed it later?

I would just have to find a way to make money from home or work between Robert’s hours.  It was time for a vehicular pardon of the old Jetta.  In the scary moment when we both realized this, we felt both nervous and liberated.  We would have to exercise one car faith and believe that no matter what, God was in the driver’s seat, to use a bad cliche disguised as a bad pun, and He would provide for us just as He always had.

It hasn’t been long living in this manner yet, but I have managed to find a few sources of income in which the car has not been an issue.  It feels great to have been able to simplify our lives just a little more, running on one car faith.

Author of MEMOIRS OF AN ORDINARY GIRL series http://bit.ly/tlklaes
View all posts by caverns of my mind »
← How Words Shape Our Perspectives
Making an Example of My Marriage →