View the Uphill from Under the Hill

In Florida, we don’t have hills, but we have bridges. On my out and back 5 mile training run, I began the tackle of the bridge and was at the peak when I hit mile one. I could say it was smooth sailing after that, or all downhill from there… but I hate cliches. I felt great though. Sure, it was humid, but the temperature was a good ten degrees cooler than my usual Saturday morning runs, so I considered that a win. The path I chose had small rolling hills, but nothing I couldn’t handle that morning. I guess I was in the right place mentally and physically.

I did the turnaround at 2.5 miles and headed back towards that bridge. I knew I would hit mile 4 right before I got to the peak. The run had felt exhilarating and I figured I’d just blast up that hill, er…bridge and be done with it.

The thing is, though, that for some reason I saw the bridge looming ahead, and it seemed more intimidating from this side. The incline is steeper headed inland, and my legs suddenly hurt. My breathing got out of whack. I was floundering. For about ten seconds, my mental battle just about clobbered me physically. I thought I would throw up. I began to fear being able to run over that bridge twice the day of the half marathon I am training for.

But I wouldn’t let myself quit. I wouldn’t allow myself to walk. I hated myself for those ten seconds, but I knew that I could do it if I just kept moving my legs. I had the strength. I was almost to the top, and I only had one mile to go. Downhill would be so much better, if I could just make it to the top. And then I did. I wanted to have a Rocky moment, but that would have held back my time if I stopped to jump up and down with my arms in the air at the top of the bridge, so I just smiled and kept plugging.

That has been my life for the last couple years. I have scaled, hiked, crawled, and run hills I thought would defeat me, but I have tried to remember that I am not in it alone. Peter walked on water. Maybe not for long before he doubted himself, but Jesus was there to catch him, and when I feel like I cannot crest the next hill, and it hovers over me, I remind myself I have never really been alone. Jesus is always there when I cannot do it by my own strength. “I can do all things through Christ who strengthens me” (Philippians 4:13). I want to picture myself running into His waiting arms at the top of the hill. 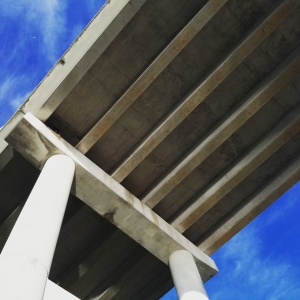 Then, when I completed my run, I stretched and walked along under that bridge that had almost defeated me, and I saw it from a different perspective. I saw its height and vastness, and I knew I had made it over the top, and I now rested in its shade. Getting over our hills can be a mental, emotional, or physical challenge, but once we make it to the other side, we can rest in its shade.

Author of MEMOIRS OF AN ORDINARY GIRL series http://bit.ly/tlklaes
View all posts by caverns of my mind »
← The Quiet Hours
Hurricane Harper →