RSS Feed
← My Words as Weapons: The Johns
Leaping Liebsters! →

A Throw Back Thursday poem from 1994, when I believe I was a high school junior.  I once attempted to translate this into Spanish for a class assignment, but I cannot find that and it was probably all wrong anyway. 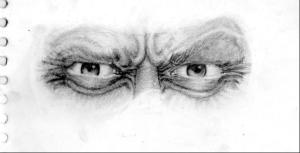 There once was a man

that could pierce your body through

He lived in the darkness

in his own little world,

but longed for something more

There came a day

when this sinister man

knew Death was at his door

He tried to fight back,

but could not succeed,

then collapsed from an awful disease

his arms folded over his chest.

It is hard to believe

such a misfortunate man

could have such a tranquil rest.

Author of MEMOIRS OF AN ORDINARY GIRL series http://bit.ly/tlklaes
View all posts by caverns of my mind »
← My Words as Weapons: The Johns
Leaping Liebsters! →