As I gazed into my refrigerator,  scanning the array of splendor of my Thanksgiving leftovers, the slices from the peanut butter-chocolate pie my mother brought over to share for the holiday caught my attention, and I suddenly lost myself musing over pie.  I like pie.  I mean, I really like pie; however, I don’t eat it often.  It’s not always a convenient dessert choice when only two people live in my house.  It makes the rule my dad came up with of splitting desserts into as many pieces as there are people present to eat it a bit difficult.  Portion sizes are important and eating half a pie in one sitting is not a smart choice for anyone attempting to eat at least somewhat healthily.  Sigh.  And so, pie around here is a rarity.  We tend to go with candy bars or ice cream (a pint is a reasonable portion size, right?)

Then they occurred to me, the multifarious choices in the pie world, and that they do not have to be a dessert.  Sometimes pie is a meal.  Think about it: chicken pot pie, shepherd’s pie (yum!), minced meat pie (though I will not eat one- I saw Sweeney Todd), and pizza pie.  After all, “when the moon hits your eye like a big pizza pie, that’s amore!” That’s right, pizza is a pie, and the possibilities are nearly endless when it comes to pizza, though I prefer to stick with my pepperoni… and maybe bacon.

This time of year, some pies are considered staples for the menu.  Sweet potato pie, pumpkin pie, and pecan pies adorn tables at holiday feasts; yet, somehow I missed these for Thanksgiving.  Now I feel almost un-American.  And speaking of American, homemade apple pie is always scrumptious, and can certainly be worked into this season, or any other for that matter.

Some pies are actually rather ambiguous.  Boston creams are mostly cake, right? And Moon Pies are really more of a couple of cookies slapped together with deliciousness and preservatives, and then dipped into chocolate.  And then cow pies are really not edible at all, so do not be fooled, no matter what an older sibling may tell you.  I’ve always thought cutie pies were much better, however also not edible. 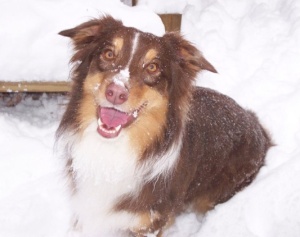 This is my chance to shamelessly show off my adorable MJ. Cutie pie, right?

Then some pies are unmistakable and classic.  Any pie that can have meringue spread on top fits this definition, especially the lemon meringue pie, both sweet and tart all at once.  I once made a Key lime pie and juiced those tiny little limes myself.  The pie was worth all that work…once, but I’ll just use the bottled juice next time, thank you very much!

When I was a kid, I remember my mother making some kind of frozen pie with yogurt and Cool Whip, I think. Those were good.  I preferred to make pudding pies when I was a kid because they were so easy, and I always licked the beaters (I recommend always turning the mixer off first).  Chocolate pudding or butterscotch pudding with Cool Whip smothered on top were my most common flavors.  I always ordered the French Silk pie at a particular restaurant when I was a kid.  Of course, after reading The Help I’ll never look at chocolate pie the same again, and I think I’d prefer to make it myself from now on.

Over the years I have learned to appreciate a type of pie I did not respect as a child: banana cream.  What was I thinking before?  I missed out on so much goodness…and an excuse to eat Nilla Wafers.

On a side note, I’ve always thought it would be fun to engage in a pie fight.  Not at my house though.

(This post is brought to you by my growling stomach.)

Author of MEMOIRS OF AN ORDINARY GIRL series http://bit.ly/tlklaes
View all posts by caverns of my mind »
← I’m as Thankful as a Turkey the Day after Thanksgiving
My Sole Soul Mate →