Because Sweat is Weakness Leaving the Body…

In exactly a week from right now I should be done with my third and final run in the Ragnar FL Keys 2014 race and my van will be in Key West waiting for our second half to finish.  A month ago I was doubting I’d be able to run in this race, but I went out for my first long run in two months this morning, and I feel awesome.  I still feel like I didn’t get in as much training as I would have liked, but I’m proud not to have given up.

When I couldn’t run, I rode my bike or worked out on the elliptical, which I hate because it’s so boring.  I attempted comeback runs a couple times before I succeeded without crying because of the pain in my leg.  In caring for my leg and combating the pain, I knew it would be hard.  But I’m running again, and sweating out the weakness.

The other part that makes this great is that I have an amazing support team of local runners, and of course, my Ragnarrhea teammates.  Thanks to everyone who has helped encourage me to get back out there.  This Ragnar was supposed to be my most challenging because I was originally going to take on more miles.  But now it’s the most challenging because I’ve had to get my head straight.  Running isn’t just physical, but mental as well.  And I’ve got my mantra now:  “I can do all things through Christ who strengthens me.” (Philippians 4:13)

In just three weeks from right now, I will be participating in my fourth Ragnar Relay, where eleven friends and I will divide into two vans and each run three times for a total of 200 miles from Miami to Key West.  It’s an awesome experience.  It may not sound fun, but oh, IT IS!

I had a scare going into it this year though.  While training for a half marathon I was supposed to run just over a month ago, I injured my leg, leaving me not only unable to run my half marathon, but I was unable to run at all.  I’ve had to cross train with my bike, elliptical machine, and do pilates and yoga to try to compensate while my leg had to heal.

Two weeks ago I decided to give a short run a try because my leg wasn’t hurting too much anymore.  The results were less than desirable.  The run itself didn’t feel so bad, but my leg hurt fairly constantly for the next three days.

Now, through lots of prayer, essential repairing vitamins and supplements, and cross training, I have decided it is time to try it again tomorrow.  My leg has been completely pain free for the last three days, and that is not something I could say about any of the days before this, so I think it’s time.  I’ll start with a few short runs and keep on supplementing with other exercise, but three weeks isn’t much time, and I think I’m finally ready.

The first two years we did this race, my running name was Terrinator and we ran for Love 146. 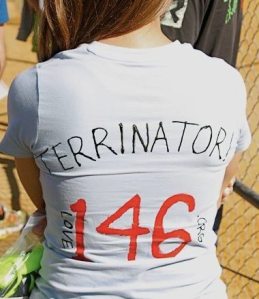 Last year and this coming race, I’m part of team Ragnarrhea and my running name is Excretia.  I know it’s gross, but if you run (pun intended), you get it.

Take a look at what the Ragnar experience is all about with this video by my teammate, Josh, a.k.a Poop Dust, the runner formerly known as Deuce.

I wish I had a montage of all those great comeback scenes from Hollywood to go along with this post, but you’ll just have to imagine them in your head.  However, you may feel free to play “Gonna Fly Now” in the background and picture me dancing around at the top of the Philadelphia Museum of Art (that’s what will be going through my head, even though I’ve never even been there-shhh). 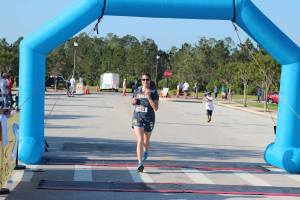 At the beginning of September I began a 12-week training program for a half marathon.  My first half marathon.  It was a BIG deal to me.  About two-thirds through I realized I had an extra week because I’d miscalculated, but that was no big deal because it would just give me a chance to get better and stronger.  For the first time in my three years of running, I was really feeling like a runner.

“Oh, sorry I cannot make it out for drinks today; I have a 10-miler to do this afternoon,” was something I found myself saying on more than one occasion.  One of those runs was also done in the cool of a fall Florida rain. I felt so hardcore.

At the eleven week mark I went for my forth 10-miler.  The morning was a bit warmer than I prefer for running distances, but whatever.  About a mile and a half from home I came around a curve and saw a stick on the trail.  But it wasn’t a stick because sticks don’t generally move on their own, and in a moment of confusion and needing to take quick action because my feet were not on the ground and I needed to avoid stepping on or near this thing, I took a panicked side-step.  Then I kept going.  My legs were sore, so nothing seemed unusual in that last mile and a half, but one particular sore spot would not stop hurting after a good stretch and it continued for a few days, and then several days, and by then I was not running anymore.  I had exactly two weeks from that fateful day until the half marathon I had been working so hard to dominate.

I told myself and others that I’d take a few days off and then get back out there.  I researched online to figure out what it was.  I got x-rays.  It still remains a mystery.  My thought was a tibial stress fracture, but it didn’t show up on the x-rays (incidentally, they often do not show up on x-rays, and I wasn’t ready to pay for an MRI).  Other possibilities were torn ligaments or tendons.  None sounded fun, and none could really be treated any more than what I was already doing, so I sucked it up, limped around, and tried not to cry.  I had to come to terms that I would not be running the half marathon.

The half marathon took place just over a week ago (and at night), and I went to support my running friends and because there was a holiday parade following the runners.  During the parade, it began to sprinkle, and then to suddenly pour.  Police on bikes rode the route to tell everyone to go home due to incoming bad weather.  All those half marathoners were already out there running though.  I was oddly grateful to not be out there in the mess, though I had secretly had to hold back tears as I saw my fellow runners pass at the start of the race.  In all the craziness, a tornado even touched down in town.  Fortunately all the runners were safe, but I hear it was a scary and disorienting experience.

A few days ago I decided I would attempt to get out on my bike now that I’m not limping anymore.  I know I’m not quite ready for the impact of running, but the bike doesn’t aggravate the injury at all now and I’m building up other important muscles that will help me make my comeback when I am ready to run.  There will be other half marathons, but I have something else coming up that is even more important to me.  This will be my forth year participating in the 200 mile relay race called Ragnar.  I’m runner four, which is quite hardcore.  We run from Miami to Key West, and I cannot miss this.  I’ve got about six and a half weeks to train.  I can’t let down my team and I can’t break tradition.