On the last day of school of my first year as a teacher (so long ago now), while moving desks back in place after the final exam, I saw “Hurricane Harper”scribbled on a desk in pencil, and a swirl representative of said force of nature doodled next to the words. It amused me. I must have made some sort of impact on that student’s life.

It’s old news now, but about a month and a half ago a little storm named Matthew interrupted life as we know it and did some real damage close to home here in Florida. He threatened to come in as a category 4, and some tracks even showed him plowing across the peninsula, and making a loop back over the state again. Thankfully, that didn’t happen, and he even took a little, much needed wobble to the east.

We evacuated. Well, we had already planned a long vacation weekend, so we just renamed it our EVACation. Anyway, watching from a distance, not knowing if we would even have a house to come home to was scary. Meteorologists can only predict so much. There is an unpredictability to the extent of the damage that will come with a storm such as Matthew… 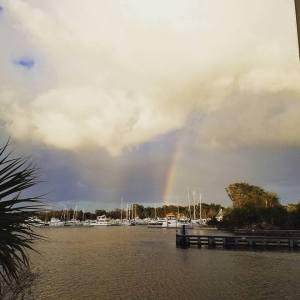 I wouldn’t say I am the dangerous or unpredictable one, but my life has been a storm for the last few years, and it keeps doubling back over itself. I guess I’m just getting tired of all this spinning.

It makes me dizzy.

However, eventually Matthew did lose strength and speed, so I have to believe this storm will too.  A few days after we were back I saw a rainbow while I was out running. A rainbow always gives me hope.