Today we say goodbye. You’ll be joining your sister soon. I know you’ve been missing her. We all have.

You were our first dog together and we had so much to learn about dog-parenting. Thanks for being patient with us, but gently letting us know when we needed to do certain things… like that day I went to bed to nap off a migraine and you let us know you were essential on our bed, especially if I didn’t feel well. You were right. No dogs on the bed was a silly rule.

We adopted you into our lives because Robert wanted a dog. Honestly, I wasn’t really sure at first, but you let me know early on that you were also an essential protector as well as healer. How in the world had I been answering the front door before you had come into our lives? Certainly it was only a matter of time before someone with a package, wearing a uniform or a hat (or a uniform with a hat), or a kid selling magazine subscriptions was going to murder me if you hadn’t been there standing between us, immovable. Once you knew you could herd Girl Scouts they were ok. By the way, it was a nice touch when you raised up on your hind legs like a bear and put up your Wookie arms in the long window next to the front door. One time a delivery person actually just threw my package towards the door from the walkway and ran off.

You’ve been extra lovable since we had to say goodbye to MJ. I just wish you had been comfortable enough, physically, to put that love into cuddles more often. But that’s the problem: you haven’t been able to get comfortable for some time now, and pacing is the only thing that seems to help. But those back legs just aren’t moving like they’re supposed to anymore.

Knowing when it was time to let your sister go was hard, but now with you, it’s been nearly impossible. You’ve lived a long, happy life with us. We were worried about how you would do without MJ. It hasn’t been the same since. You’ve been more lonely and depressed. So have we. Thank you for sticking around for almost a full year after her passing to make sure we would be ok.  We will…eventually. You’ll both always be part of us, but we’ll keep missing you both forever. Eventually we’ll have more dogs, and we’ll love them. But you’ll always have been our first and most alpha of our dogs. Just as you walked into a pet store or dog park and ruled the place without having to do anything but be there, you ruled our hearts immediately. Thank you for giving us thirteen of your fourteen years and for being part of our family. You have given us so many cherished memories and all of your love.

You really haven’t been able to hear me sing to you for a while now, but here’s our song, one last time.

Thursday was one of the worst days of my life. I lost a piece of my heart. I had to say goodbye to my MJ, my sweet Mara Jade, forever my puppy. 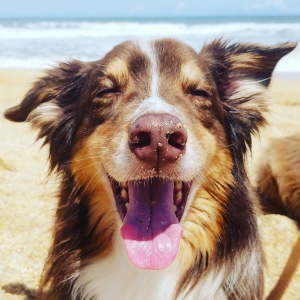 MJ’s last outing to the beach.

Sometime early last fall we thought she had a uti. Through a series of vet visits, prescriptions, homeopathic additives, and tears, she still did not seem to be herself. Eventually, this lead to a visit with a specialist and a surgery that lead to a biopsy, which proved positive for urethral transitional cell carcinoma. Our baby was in the 1 percent! That’s about how common dog bladder cancer is, and hers was even more rare as it was actually forming where it would eventually prevent her from even being able to pee. It also turns out it is an extremely aggressive cancer, with no cure, and a life expectancy of about 6 months if untreated, maybe about 8 with chemo. She had already been sick since at least October. We opted for mostly pain management, I researched a diet for dogs with cancer, and we got her special vitamins.

We loved her as much as we could. We wanted to fill her remaining time with adventures and quality time. She wasn’t up for as many adventures as we had hoped. Her energy faded, and even with her extra healthy diet and an appetite that was still strong, her body was using all those nutrients to fight and she was quickly losing weight, and her battle.

From the first night after her surgery that we felt she was healed enough, she not only slept on the bed between us, but she often stretched herself the long way against my side or back, as if she was soaking up or radiating into me as much love as she could. Her last week or so, nights were bad for her. She couldn’t get comfortable, and she was panting so hard she shook the whole bed sometimes. But she slept right up next to me, even on her last night, and I’ll never forget her looking at me with those ever intense eyes of hers as the light started to pervade the room. We knew it was the day. We had set up the appointment days before. I think she knew too. She didn’t want to move around much and just settled on a towel on our screened in back porch, staring into my eyes as I just talked to her.

I wanted to be able to write a beautiful tribute for MJ when her time came, but I knew I’d be the blubbering mess I am now, unable to focus or make much sense. What I did was write a little something from my heart about a week before we put her down. I knew it was coming, and I think she was trying to let me know too. This is what I had written before I even had the nerve to tell Robert I knew we were close.

When Dylan first accepted MJ as his baby sister, he let her snuggle with his best friend, Green.

She will never have been “just a dog.” She is…

MJ will never have been “just a dog.” She was our fur baby, our little girl, our puppy, our family. She loved unconditionally, and she loved hard. I know her time is coming, and coming faster than I thought it would. I don’t want to cheat her out of any of her quality time in joy and love, but her bad times are becoming more frequent now, and I also cannot drag out her pain and suffering. I don’t ever want to say goodbye, but I know it’s coming. I cannot imagine coming home to a house without my MJ greeting me. And I cannot cry in front of her because she feels so much that I feel. I haven’t had much loss in my life, thankfully, and I just don’t know how to prepare for this.

There is no way to prepare, and I know she’s now gone, but it still just doesn’t feel real yet. I’m glad we said goodbye in our home, where she was comfortable. I’m glad her brother was there and that I got to pet her as she went to sleep forever. 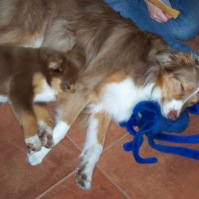 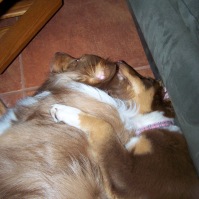