Another Book, Another Soundtrack 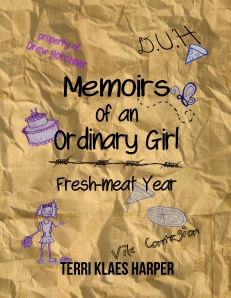 In my upcoming book Memoirs of an Ordinary Girl: Fresh-meat Year, Drew’s musical tastes have grown and grunge has been unleashed. With each video, I’ve included the excerpt where the song or band is mentioned.

“My guess was he was just a bit taller than I was, and his dark brown hair hung in his face, covering one of his eyes. He wore a black Metallica tee shirt, so I knew he had good taste in music. We would be a perfect match.”

“In the time it took me that night to do my homework, except for the pre-algebra I was avoiding, and listening to my entire Jesus Jones cassette tape (both sides), Ryan called for my sister seven times.”

“I expressed this theory to Adrienne as I dropped off her books that afternoon and we watched Paula Abdul and Keanu Reeves in her Rebel Without a Cause style video for ‘Rush Rush.’ Somehow we found her to be an acceptable pop artist, and we both drooled over Keanu, just as we had while watching him bring down surfer bank robbers in Point Break.”

“That evening I was introduced to Nirvana for the first time and their “Smells Like Teen Spirit” video revolutionized our outlooks on pep rallies and helped usher in a whole new style of musical genius to teens everywhere. Soon after, the Bubba-Joes and Allie-Maes of Florntayor weren’t the only ones wearing flannel shirts. Grunge had arrived, and it was wonderful.”

Dustin and Adrienne were watching Ozzy’s “No More Tears” video from an old floral couch with wooden trim and threadbare arms.

“That was Chip Dicksen, the redneck senior in my math class who thinks grabbing my ankle is a turn on.”
“You better watch out. With that mullet, he’s likely to sing ‘Achy Breaky Heart’ to you.” I simply rolled my eyes in response.

While Anne and I happily watched Anthony Keidis running and running in the “Under the Bridge” video, Mona and Violet’s minion Julia came sauntering in our direction.

I spied a black Soundgarden shirt draped over his desk chair, which I picked up and flung at him. “I’m going to need you to put this on,” I said as I lowered my backpack from my shoulders, untangling my hair from the upper loop.

Firehouse: Love of a Lifetime

“It’s a mystery,” she replied, shaking her head sympathetically. “But they danced to ‘Love of a Lifetime,’ so they’re probably going out now. I saw them together earlier.”

We managed to escape the world where parents mattered while attempting to rescue Princess Toadstool, later known as Princess Peach, in Dustin’s attic bedroom. Guns N’ Roses blared from the stereo. We stopped between levels as “Don’t Cry” came on. “I love this song. I know it’s a released song and everyone knows it and all, but it’s still one of my favorites on this album,” Dustin admitted, and we listened without speaking, all the way until Axl Rose held out the final note, his voice wavering up and down, and then we resumed the game until Adrienne’s mom showed up.

“Ugh. Now I have to find another date,” I replied.
“Take Adrienne.”
“No way. She’s got Jane’s Addiction concert tickets that night. Besides, Angela didn’t think I could get a real date, so the gauntlet has been thrown down, in a matter of speaking.”

The great debates of our lives became whether or not Adrienne and I were going to torture ourselves by not only attending the upcoming homecoming game but the dance as well, whether Nirvana or Pearl Jam was better, and whether or not Dustin liked me. We were currently undecided on all fronts.

Bryan Adams: Everything I Do

For the rest of the night some poetry was recited by a mousy junior girl and Bryan Adams’s “Everything I Do” was sung a cappella, and badly, by a senior who was using it as a means to ask a girl to prom. She said yes and with tears in her eyes, which were obviously there for different reasons than the tears I had in my eyes after the performance.

Sex Pistols: God Save the Queen

“Do you think they’ll have Sid and Nancy: Love Kills?” Adrienne had taken an interest in British punk music as of late, and had written “God Save the Queen” and “Sex Pistols” on all her notebooks.

He played the usual “Electric Slide” type torture after the first bride and groom and father and daughter dances, but he had brought along a selection that Dustin and I enjoyed as well, including Guns N’ Roses’ “Patience,” which became our slow dance for the evening.

The Doors: Riders on the Storm

We both sat without speaking for what felt like eternity, but I knew was only about thirty seconds because we only covered a short stretch of the drive home in that time and we didn’t make it past the beginning of The Doors’ “Riders on the Storm.”

I love reliving my youth through the music that shaped it, and I think Drew would too.  Hopefully you relived yours a bit as well.  The book will be unleashed tomorrow at http://bit.ly/tlklaes

Memoirs of an Ordinary Girl: The Middle-ish Ages, the Soundtrack

Memoirs of an Ordinary Girl: The Middle-ish Ages takes place from 1988-1991, and since music is so important to Drew, my protagonist, I’ve pieced together a soundtrack based off mentions in the book, as well as my personal memories of the time period, for better, or sometimes, worse. Seriously, a few of these songs are awful, but they’re true to the time period. I wanted to make a public playlist in iTunes, but apparently that is no longer an option, so you can enjoy my inclusion of videos instead. Now you get a taste of the fashion too. Let’s hope most of it does not cycle back around.

A great big thanks to Youtube, our modern day MTV.

My favorite band around eighth grade. I was in love with Sebastian Bach and jealous of his hair.

My hair now. I swear it’s just a coincidence.

Speaking of hair, anyone remember when Jon had all that hair?

Poison: Nothing but a Good Time

The epitome of glam rock.

Milli Vanilli: Blame it on the Rain

Or maybe blame it on the lip synching.

The fish at the end of the video caused quite an uproar, but we were assured no paraphyletics were harmed in the filming of this video.

A humorous note here: their semi-coordinated stage outfits remind me a bit of stormtroopers. A sad note: I believe the front-man, Janie Lane, died a few years ago.

The first time I heard this song one of the skater kids in my class (probably 6th grade?) brought it in and talked the teacher into letting him play it for us. I had no access to music like that back then, but I wanted it!

Bad English: When I See You Smile

This song was out not long before I moved and somehow it became the song my best friend and I used to remember each other (my Bridgette, Drew’s Belle)

New Kids on the Block: Step by Step

What I hated most from pop-culture of this time period was those stupid NKOTB t-shirts with the florescent handprints, and I believe their signatures.  They were everywhere!  I forgot this song existed until a grown man played it recently in my presence.  Weird. And all these years later… I still find it just as cheesy.

Poison: Every Rose has its Thorn

Still a sing-along song for me if it comes on the radio while I’m in the car.

I didn’t appreciate this song at the time, but I did like the video (even though I wasn’t supposed to be watching any videos)

M.C. Hammer: U Can’t Touch This

I think these pants are trying to come back in style. Please don’t let it happen.

Turns out I have the same birthday as Robert Van Winkle, which many young girls were jealous of at the time.  Personally, I was insulted. He moved on to flipping big houses in Florida.  Who knew?

Posted in Author, Uncategorized and tagged book soundtrack, hair bands, Memoirs of an Ordinary Girl: the Middle-ish Ages, music for my book, music from my childhood. Bookmark the permalink.