School is out for most schools in the US now, and graduations may be behind us for the year, which is probably a good thing. We can finally breathe easy. Is it just me, or do kids seem to be having graduation ceremonies at every grade these days? Preschool. Kindergarten. Sixth grade. Eighth grade. Twelfth grade. Doesn’t this sort of take away from the graduations that really matter? I picture the kids thinking the equivalent of Forrest Gump and his, “Then ah met the President…again.”

It’s not that moving up to a new grade isn’t important, but in the younger grade levels, it’s certainly more expected, in our culture anyway. It’s like saying, “Congratulations for breathing today!”  Isn’t breathing its own reward? They were probably going to pass kindergarten anyway. Legally, kids have to complete so much schooling.

Completing kindergarten is part of the process of growing up.  Sure, it’s great, but it’s not even a grade with a number yet.  Far more kindergarteners will move on in their education than people will actually complete high school.  Graduation should be about achievement.  But what else should we expect in a society that stops recognizing kids who make honor roll in ceremonies and instead rewards everyone equally? The parts of life that take hard work are being recognized less because it makes those who do not succeed feel badly about themselves.

In my opinion, Jostens and Herff Jones are the ones behind this.  It’s all about making money and much less about the achievements of the children. Sure, it’s adorable to see these little smiling faces in caps and gowns, because we’re used to those being things for older children and young adults.  It’s similar to the way I feel baby shoes are so freaking cute, especially baby Converse or Vans.

Maybe I’m just bitter though. I didn’t have any graduations until I finished twelfth grade. My sisters had both had eighth grade graduation ceremonies, but we moved long before I had my chance, and my middle school did not subscribe to the graduation idea.  I even remember my sisters getting gifts for their graduations, but since I didn’t have a ceremony and only did all the other same stuff to move up into high school, I didn’t get any presents when it was my turn. You know why?  Because it wasn’t a huge deal and nobody thought it was special because there was no ceremony beating them over the head to remind them.

I don’t know the numbers, but when I attended the graduation of the high school I taught at up until last year so I could see my former students graduate, the numbers seemed smaller than years past.  I guess this graduating class was smaller than they have been recently, but a few teachers also told me less kids had decided to attend the ceremony.  How sad!  Graduating from high school truly is a huge rite of passage, and not everyone does it, so it is special, yet more kids are choosing not to attend these days.  My theory is that they don’t see it as all that special since they’ve already done it so many times.  Can we save to special occasions for the occasions that are special so they retain their meaning and importance?

I “walked” for my high school graduation. 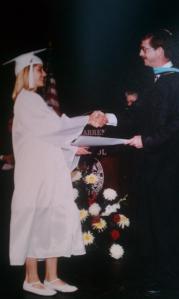 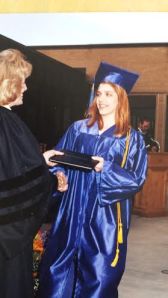