Since this was my last year teaching, I did things I wouldn’t normally do in the past…like chaperone the prom.  I really had no interest in reliving it after my own, but it was fun to see so many of my students dressed up, looking so mature (though my husband kept saying, “Aw, they’re just babies.”)  We got our picture taken while there and I just picked them up last week and decided to share on Facebook.  People love pictures and it got a good response, so I decided to share here as well. 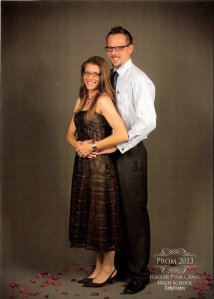 Of course, after this I got nostalgic, so I found my actual prom pictures from high school.  I have little to say about them.  I’ll let the pictures mostly speak for themselves. 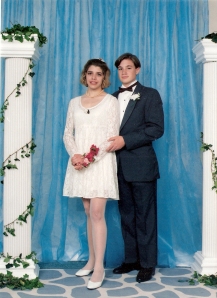 1994. My junior prom, with Andy- WCHS
I believe we played at Toys-R-Us before the dance.

And of course, my senior prom…

1995. Senior prom with Darryl- WCHS
I even got my hair done.

Author of MEMOIRS OF AN ORDINARY GIRL series http://bit.ly/tlklaes
View all posts by caverns of my mind »
← Proud to be a Grammar Nazi
My Own God Story →